In Eve Fairbanks’ article “Overtime in Soccer City” published in last Sunday’s NY Times Magazine the author states that “real transfiguration often happens far from the cathedrals we build for it” (p. 15). Fairbanks was referring to the sense of South African pride that emerged not from the presence of large monumental football stadiums created by the government for the World Cup in 2010, but instead from the idea of the World Cup itself and more specifically from the public parks where people gather to watch matches on television, to play board games, and to commune with one another. So while architectural monuments or cathedrals to the World Cup remain largely empty, the ideas and sense of nationhood surrounding the World Cup as an event and symbol remain palpable sources of pride and South African identity.

It strikes me that this is so often the case, that the monuments we deliberately create to serve a community, to house culture, to act as inspirational forces in our lives do not always fulfill such lofty goals. And, instead, community and culture and inspiration come from more interstitial spaces, from the ideas and excitement that began the planning and building of those monuments in the first place.

Museums in particular serve this function. Board of Directors host architectural competitions in search of the most elaborate, creative, and grandeur redesigns of museums that, once built, aim to capture the hearts of city residents and the envy of other metropolises. But, after the newness has worn off, the objects housed inside these exquisite structures often go unseen or quickly viewed and then passed over for more dedicated time spent at the gift shop or cafe.

Perhaps the problem is not with the emphasis on these new monuments, on these cathedral-like spaces that we, as a society, build to house the material and cultural remnants of our past, but rather the problem lies in our approach to these objects. If we allow objects, now defined as works of art, to exist only in the architectural confines of a museum, we remove much of the life and meaning contained within their material forms. A second-century schist image of bodhisattva Avalokitesvara poised on a white pedestal in a strategically lit gallery has had much of its life-force as an image removed, its biography halted and subsumed within the larger museum collection in which it now resides. Its context as part of a larger stupa, as an image among many in an active Buddhist monastery is certainly gone, lost as much to shifts in political and cultural forces as to the deafening cadence of time passing. 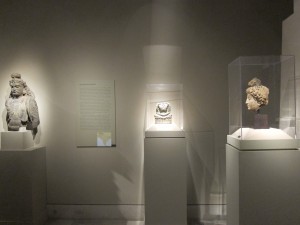 But what if, instead, this Avalokitsevara could find a physical home, even if temporary, in which to act as spiritual inspiration for potentially lost souls, as it was no doubt once intended; or perhaps could live amongst men and women in a public space as they went about their daily lives, conversing, existing; or could be privy to the sound of chanting and music, the smell of incense and cooked food, the touch of devotees and curious onlookers? Is it possible for this object to leave the comfort and security of the gallery, where it is surrounded by numerous other “like” images and as such serves to narrate a particular story about Buddhism, about history, about South Asian art?

Would such a move jeopardize its materiality and its value, or would it be perceived as fetishizing or gimmicky? After all, the Avalokitsevara has likely for many years been removed from its “original” religious context, categorized as art, and bought and sold in an art market that values its formal characteristics, its iconography, the quality of its carving, the color of its stone. The challenge then is how to balance both lives of an object like this – both its artistic and cultural presence – and how and where to do it that honors both. Can real engagement with historical objects happen outside the artistic and cultural cathedrals that we build to house them? Can a kind of transfiguration of sorts occur in which objects cease to be merely material and historical things and take on the forms of something more meaningful and inspirational? Can we find a way to harness some of the excitement and visual interest that these objects convey, but to do it outside, beyond, or in new ways within established spaces for art-viewing?