If you haven’t been lately, it is worth a visit to the National Museum in New Delhi to see the recently opened exhibition Nauras: The Many Arts of the Deccan.

Curated by Dr. Preeti Bahadur Ramaswamy and Dr. Kavita Singh, the show brings together a diverse body of work – from textiles to metal hookahs to miniature paintings – which narrate the fascinating history of Islamicate kingdoms that flourished throughout the Deccan from the 16th to 18th centuries. Several objects on display particularly piqued my interest:

wonderfully bizarre buraq figures – depictions of the celestial steed that carried the Prophet to heaven – rendered in paint + wood; 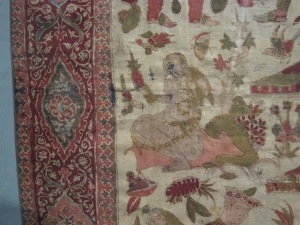 an exquisite kalamkari coverlet from c.1640 with several charming depictions including a yogi admiring a pineapple, a “new” and “exotic” fruit of the time brought to the subcontinent by the Portuguese; 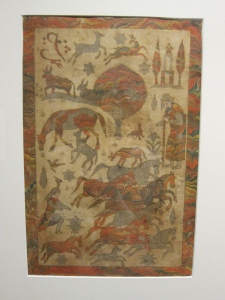 fantastic 17th century marble paintings (remember making marble paper as a kid? I do. These are worlds away in terms of aesthetics and technique, but recall the same joy of seeing pigments swirling on water, captured on paper);

and a stunning (and enormous) embroidered hanging that recalls the forms and figures of handpainted kalamakari textiles and murals produced under Vijayanagara rule. 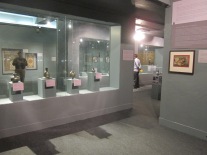 I was also struck by the creative installation of the exhibition and some of the risks taken by the exhibition designers. Not all of them worked for me. I could have done without the overly dramatic lighting which produced unpleasant glares on the plexi cases of so many objects and the ambient music mixed with water sounds and chirping bird which failed to evoke the atmosphere of the Bijapur court (as I imagine it was intended) and instead reminded me of standing in line for a jungle-themed ride at an amusement park. That said, I did appreciate the incorporation of wall decals peppered throughout the exhibition featuring motifs pulled from highlighted objects, which lent a whimsical and  other-worldly flare to the show as well as the move to use digital reproductions of more obscure (and I imagine fragile) works on paper (such as the Nujum al-Ulum) in lieu of (or adjacent to) the real thing, which enlarged otherwise minuscule paintings and succeeded in conveying some of the themes and motifs of the moment. 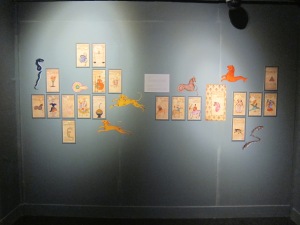 Overall, a real treat and visual feast for the eyes! On view until March 20, 2015, admission included with price of entry to the National Museum, open everyday except Mondays.